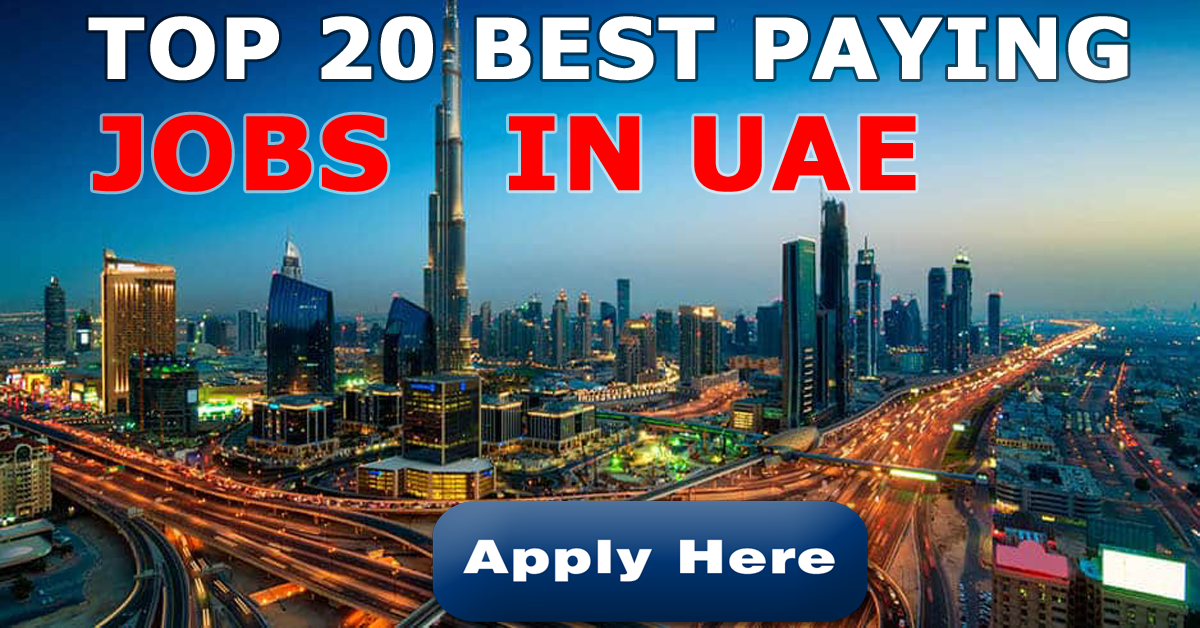 Best Paying jobs In UAE : Job salaries have for so long determined the tastes and preferences of job seekers on the job market, be it that they are unemployed or seeking to find new jobs or new career paths as opposed to the ones they occupy at the particular time. Many job seekers looking for jobs first ask about the salary scale to determine if they are willing to work in a particular job advertised or not. UAE is no different.

Located in the Persian Gulf, United Arab Emirates is increasingly becoming a hub of employment attracting job seekers from all over the world. With cities like Dubai, Abu Dhabi and others known for having job opportunities, the country is experiencing a lot of economic growth which can be attributed to the country’s rich mineral, oil.

Some of the most booming and popular economic sectors in the country; which not only have the most job vacancies but also manage to employ most are healthcare, hospitality, education, travel, HR & Admin, production/manufacturing, automotive and ancillary.

The booming economic sectors managed to increase the need for easy access not only for job opportunities to the job seekers but also employers who seek the most suitable employees for the jobs advertised. This has increased on-line demand for jobs, job search activities and job posting for employers. In simple terms, this means that job seekers, due to the failure to cover all areas which potentially have jobs and careers they may be interested in, are turning to online jobs, job search and career opportunities.

Despite the booming on-line job search, there are a number of fraudsters who have also come up and job seekers are being used for selfish gains by the fake job search engines. Genuine job search websites like UAE Jobs- For Jobs in United Arab Emirates, which provides the latest jobs, careers and employment opportunities in UAE are however available to the job seeker to upload their resumes for free and employers to upload their jobs for free.

The highest paying jobs in UAE keep on changing depending on trends. However, they are also determined by experience, qualifications, size of the company, and sometimes nationality. Job seekers holding western qualifications are more likely to earn the top end salaries as compared to Asians, Africans, and Middle East.

The nationality of a person, although not indicated in job advertisements sometimes; determines the salary scale of a person a lot. It also determines whether or not someone will get hired.

In any industry, the top five will definitely earn the most or will be paid the most. However, as a job seeker or a junior seeking to climb up the ladder in individual career paths, one starts from the bottom climbing in the right conditions set forth. On average however, there are some sectors which beat others when it comes to salary or payment.

Some of the overall paying jobs in United Arab Emirates are investment bankers, doctors and corporate lawyers.

Due to the increased disagreements in the Arab speaking country, people are seeking more legal counsel which has in turn increased the demand for legal counsel which ranges from pharmaceutical, financial services to real estate which has put the country on a global status due to its buildings, among others. For in house legal counsel, the salary is between $32, 750 to $340,000 ranging from legal assistant to a chief legal officer as of 2016.

You Can Direct apply Here

The private sector ranges between $50,500 to $375,500 also depending on whether you are a paralegal or a senior partner in a law firm. These salaries however are accelerating and increasing as time goes on, they are not fixed.

As of 2012, the physicians who held the simple know-how of the medicine, or those who own a medicine degree earned between $25,000 to $30,000. Those who run clinics, medical facilities or the like were able to earn between $100,000 to $150,000 exclusive their yearly bonuses and other bonuses. These salaries however depend on the company/hospital, academic and professional background, certificates and the higher degrees and the years of experience in the field and the areas of specialty and expertise.

The sectors are however growing day in and day out and more jobs are being created. However, the number of people looking for jobs compared to the number of jobs available is higher which creates an influx of job seekers. This is a problem which has been encountered by not only the UAE but also other countries. Due to the increased literacy in the world yet several education systems are not up to date, most job seekers look to find jobs instead of creating new jobs for themselves and other job seekers. This problem has caused an increase in job seekers as opposed to jobs created.

This however does not mean that there are no jobs being created but rather that the ‘many’ jobs created cannot meet the equally many or more job seekers on the market. With the above jobs, they are central to United Arab Emirates in general. The popularity of jobs in UAE can be broken down to cities. Different cities have different groups of job seekers and different career paths which can be attributed to several reasons. Because of that, there are different best paying jobs as per cities.

Jobs in the Medical Field, Tourism, the Oil and Petroleum Industry, Financial Sector and the Aviation Industry are also popular with job seekers in Dubai due to their salary scale.

Abu Dhabi is the second largest city of the United Arab Emirates with a population of 603,492. Some of the best paying jobs in Abu Dhabi are Electric and Gas Operations Manager, Financial Director, Regional Property Operations Manager, Architect, Physician – Radiology and Attorney.

The best paying jobs however may not necessarily have the most vacancies to meet the high job search in the country. However, being an Arab speaking country with a lot of immigrants, the country has an increased need for English speaking to help with the communication on jobs.

Being a target for relocation for the unemployed, UAE’s job market has also picked